Start With The Basics

Center pivot machines have been used in irrigation for decades. Center pivots, one of several types of mechanized irrigation machines, can lead to increased yields and less water wasted compared to other irrigation practices such as flood irrigation. But how exactly does a center pivot work? Let’s first discuss some components that will help explain the concept.

Pivot Point – The central point around which the pivot moves. This is where the water enters the pivot pipes and where the control panel is located.

Control Panel – A piece of hardware attached to the pivot point that gives commands to the center pivot machine. Control panels are considered the ‘brain’ of the machine. They control starting, stopping, changing directions, running wet versus dry, and much more. A variety of control panels are available, and you can choose panels with very basic capabilities, as previously mentioned, or digital panels that can be programmed to work with advanced irrigation technologies.

Drive Unit/Drive Tower – A drive unit or drive tower is the part of the machine that touches the ground, and contains the necessary components for the machine to move. It consists of a basebeam, drive train, wheels, and various structural supports.

Span - The long pipes between drive units are called spans. Spans consist of the main water line, sprinklers, and a supporting structure of trusses to hold the weight between towers.

Tower Box – Located at each drive unit is a tower box. This compartment controls the drive unit components, telling it to move in the right direction and for how long.

As the name suggests, center pivots irrigate in a circular pattern around a central pivot point. Pivots are capable of applying water, fertilizer, chemicals, and herbicides. This versatility can improve the efficiency of irrigation practices by using a single piece of machinery to perform several functions.

Most center pivot machines are electrically powered, using either a generator or a public power source. Pivots use both 120 and 480 volts of alternating current (VAC) to operate. 120 VAC is used as the control circuit, powering the safety circuit, the forward and reverse movement of the pivot, and, more precisely, the movement of the Last Regular Drive Unit (LRDU). The 480 VAC is the power circuit and supplies the needed energy for the drive units to move. 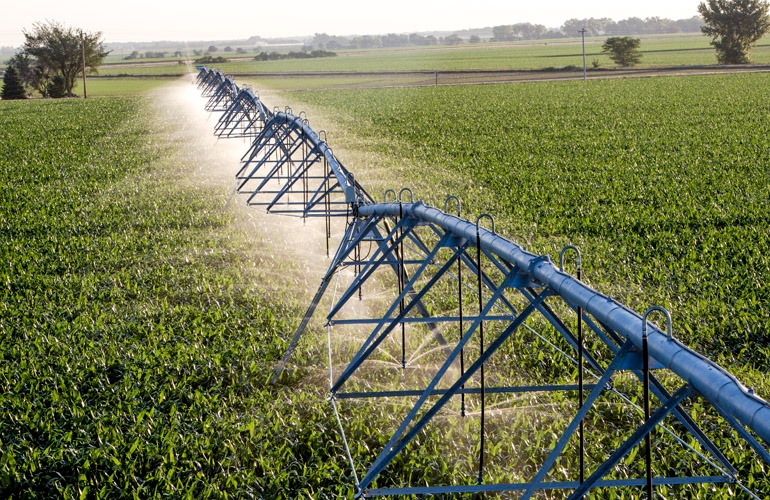 The pivot’s control panel operates the main functions of the machine. Depending on which control panel the pivot has, the controls will be different, but the way the pivot operates is the same. When a command is entered into the control panel, an electrical signal is sent down the pivot until it reaches the Last Regular Drive Unit. 480 VAC then travels through a motor lead cable from the tower box to the engine. The LRDU moves, either forward or reverse, as the control panel indicated.

When a pivot moves, it is led by the Last Regular Drive Unit. The LRDU moves until the switch arm, connecting the last span to the second-to-last tower, is pulled to an angle that activates the next tower. Both towers then move until the next tower is activated, and this continues down the pivot until all towers have moved.

This video shows the above process on a larger scale. Here you can see how each span moves independently from each other as it rotates around the pivot point.

If you’re interested in center pivot irrigation, make sure you get all the information you need to make the right decision for your operation. You can learn more about pivots, how they work, and the components that make up the machine in Theory of Pivot Operation on irrigation.education! Click the button below to log into the learning site and get started.